This may resemble a "Thought Experiment" but here it is:

If you subscribe to the idea that a person is mostly what is in their neural tissue and structure (I do) - compared to what is in the rest of their anatomy and physiology, then if you are interested in preserving the person in your current life, you will look after your health generally and your brain in particular. However, if you are not young anymore, and not likely to be part of a generation that has access to extended, vigourous, healthy, good life spans through new technologies - then you are likely to need one of the other (last resort) options for another chance at an extended life. You will be restricted to some sort of preservation of the person that is you via a Cryonics Suspension, Neural Archive or possibly some other technologies that will allow copying of neural architecture (hopefully in the not too distant future).

Ideally, it would be good to be born, grow and learn rapidly until maturity but then to continue to grow and learn and remember the things that you want to remember - FOREVER - or for at least as long as you think life is still worth living. Below is a graph that expresses this idea. 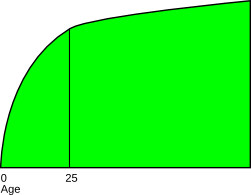 However, this "Ideal" situation currently does not happen in the real world and there are a number of problems with achieving this scenario.

Here is a more realistic "Best Case" view of things: 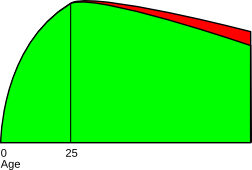 In this situation, CP and TS DO actually start decreasing after about age 25. Generally, some of the lost CP and TS is made up by "Experience" (the red area) that one gets from surviving in the real world. For example, in a conversation you might not be able to immediately recall the word "indifferent" - as in "The Universe is neither conducive nor hostile to life - it is indifferent to life." If you can't remember the word "indifferent" you will probably be able to think of another word that expresses the same sentiment and the person you are talking to will be able to understand exactly what you mean.

So in this situation, you remain in pretty good shape until the day you die, quickly, at an advanced age.

However, if you are very unlucky this is how the graph might look for you: 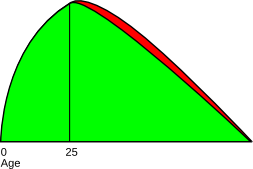 In this situation you might be afflicted with an early-onset dementia of one sort or another or even some other terrible brain destroying disease like cancer, so, by the time you die, there might be very little information worth preserving in your neurology. This is a terrible situation and one that the world should be putting more research and development into resolving.

The following graph probably describes the situation for most people and allows me to actually get to the analysis of the problem that I want to consider: 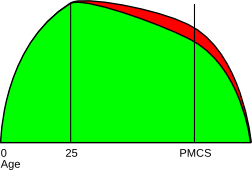 In the "Typical Case", the situation is somewhere between the "Best" and "Worst" Cases and will vary from individual to individual. So, this is the crunch, if you want your neural architecture preserved, it is likely that the best way to preserve as much of the meaningful information in your brain as possible will, by necessity, force you to think about doing that preservation IN ADVANCE of a "natural" death. That is, at a time that you judge is a good compromise between maximising the length of your current life / incorporation with the need to maximise the amount of useful information in your brain that can be preserved for future revival / re-incorporation / posterity.

The problem is, YOU ARE NOT ALLOWED TO DO THIS! In most Western jurisdictions, if you try a "Pre-Mortem Cryonic Suspension" you would be attempting suicide or, if some family / friends / colleagues / professional people help you, they will be committing one or more crimes with potentially severe penalties. This is an utterly stupid and ridiculous situation and desperately needs changing. Rational adults, who have, for one reason or another, decided that life is no longer worth living, should not be prevented from terminating their current existence either permanently or with a view to an improved existence at some time in the future. On Graph 4, the position of PMCS should be up to the sole discretion of the person themselves.

Disclaimer Firstly, this IS NOT a site promoting Voluntary Euthanasia (VE) - although I am...